The auction.  Stirs up imaginations of fast paced action amid the rapid calls of the auctioneer and shouted bid confirmations of their floor assistants. 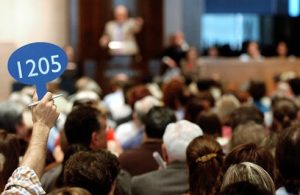 It is exciting and it is designed to be that way.  You go to an auction with the intention to buy, so you’re already in the frame of mind to spend money.  The fast pace of an auction is built around that.  They want buyers to operate on that frame of mind, to get competitive, and get single minded in their pursuit of the win.

You go to an auction with the intention to buy, so you’re already in the frame of mind to spend money.

As an auction wears on the need to purchase something grows and can become quite compelling if it’s not recognized for what it is: a response to the auction system.  The art of the deal – that deal which means a profit – comes from being intentional rather than reactive.

You spend time searching out auctions and preparing to attend.  So how much is your time worth an hour?  You might say that since you’re the owner of your business you don’t get paid, but our answer is that preparing for an auction is a function of your business and should get paid.  You won’t always be the one who does it, and it gets counter-productive real fast to ask others to perform that function for free 😉

Whatever the value is that you would pay someone to do the preparation, plus a modest increase for the business, is your minimum per hour value.

Going to the auction is your time plus the cost of transportation.  How much gas you spend, and an adjustment increase for maintenance costs and repairs distributed over the business year, any cost of equipment rental, plus a modest increase for the business.

You can see that by the time you get to an auction you’ve already invested and you need to find a deal to offset the expense.  Keeping this in mind will help keep you intentional against the urge to react.

So how much is your time worth an hour?

When you leave an auction you again have your time, your transportation, and if you have made purchases you have the costs with moving those items and storing them until they sell.

Any item you look at needs to be evaluated on how much you estimate you can sell it for and how quickly.  Then subtract the costs of going to and leaving the auction.  Whatever is left, your bids need to be below that because your estimated profit is the difference between.  Your goal is to cover your costs and make a profit.

It’s not meant to be.  It’s only meant to be kept in mind.  Seasoned auction patrons already know how much it costs them to go to an auction and they are first and foremost looking to cover those costs.  The art of the deal means knowing your own costs and keeping that value in mind.

Again, this is just an example and your numbers may differ by quite a bit, but knowing those numbers means you won’t bid $200.00 on something that you can sell for $220.00 and think you have made a profit.  That kind of bidding happens to the reactive, but not the intentional 🙂  You have to first earn that $320.00, or whatever your number is, just to break even and then exceed it to start making profit.

Generally you won’t have to recalculate your numbers on every auction.  They are your general costs applicable to most auctions unless something drastically changes in your auction routine.

Seasoned auction patrons already know how much it costs them to go to an auction and they are first and foremost looking to cover those costs.

Know your number, cover your costs, then make a profit.  Be intentional and master the art of the deal.

This post is the first of a series, category Vendor 101

We are in the midst of revamping the opportunities for … END_OF_DOCUMENT_TOKEN_TO_BE_REPLACED